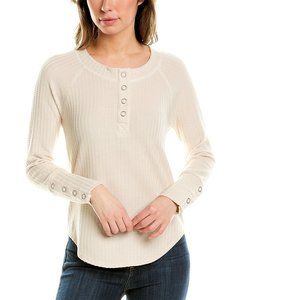 About the brand: Continuously experimenting with knits and dyes for that rugged rock-n-roll feel. Vintage Thermal Top in creme brulee with raglan sleeves, snap cuffs, and curved hem Approximately 25.5in from shoulder to hem Model is 5'9 and is wearing a size small. Measurements may vary slightly by size. Snap closure 50% viscose, 45% polyester, 5% spandex Machine wash Imported
|||

Music events online: Some of the online events that I watched.

This week's video: xiangyu "Immersive Online Live"
(First 30 minutes are a mix by Kenmochi Hidefumi, followed by a special live performance by xiangyu)

Sputrip "Breeze in the Sun"

Not much to report so far, but I was able to catch up with some updates I still had to do about 2020. 2021 looks so far like it will be an exciting year!

Time went by so fast recently that I had kind of forgotten to update my blog..! I'll try to get better again in 2021 and update regularly like before, maybe every other week? In December my sites had an outage of over 2 days because of my hosting service really messing things up, which didn't help me in getting things done. Luckily everything is back working for now! Since then I've been trying to catch up with my regular updates.

Anyway, the last three months (since my last update) were rather eventful, so below are my latest three radio shows and also the happy news of a song of which I wrote the lyrics that got released on 7" in December! I also wrote a word about a few shows. There's also some much more exciting stuff coming up for me music-wise, so stay tuned.

Radio: My radio show started in December 2019, and during 2020 I played some 150 songs in 11 episodes. All of them are archived at Mixcloud, and a list of each shows' playlists can be found at Tokyo's Coolest Sound. While it's quite a bit of work, I really appreciate this opportunity to introduce music that I love in this form.

Song release: I had the great pleasure to do the translation of the lyrics of a song, which got released on 7" (vinyl)! The song is "Soleil's Kanon", a song from band SOLEIL's album "Lollipop Sixteen", and I translated it from Japanese to... French! This ended up sung by MANON, and retitled "Le Canon de Manon", with music performed by Sally Kubota Group part of a project for bassist Sally Kubota's 60th anniversary. The song was also completely rearranged into a dub style and sounds very cool. Find all details here. The song hasn't been released digitally so far, but those who want the vinyl can get it via CDJapan (or other retailers). The intro can be heard here on YouTube. Few things can make me happier than having my name on a 7", and even on the center label!

As if this wasn't enough, the A-side features Maki Nomiya who sings a self-cover "Twiggy Twiggy", which is awesome! You can hear a bit of it here. This song definitely makes the single worth it for any Maki or P5 fan! Furthermore, guess what, I had the incredible chance to be at the studio for the recording of both songs! Yes!!! :)

Music events: While still mostly online, I've been continuing to enjoy live music regularly! Here are a few shows that stood out for me during these 10 weeks.

- hitomitoi live at Billboard Live Tokyo. One of my favorite singers, whose shows I've been seeing pretty much every year at this venue, this time online via Streaming+. This show is being re-streamed until January 4 at the bargain price of ¥1500 (tickets).

- Hoshino Michiru online show from Vivid Sound Studio. This was Michiru's last show before going on hiatus. She explained the situation and that she will be looking forward to making music again after getting some rest. The show was in two parts, a karaoke-style set, and then a trio set with cello and percussions.

- Izumi "Mimi" Kobayashi live at Blues Alley Japan. This year I had the opportunity to translate a recent interview of this famous keyboardist (from Japanese to English). Not being used to translate long articles it was a bit of a challenge but I'm very happy of this accomplishment. Mimi resides in London, but she was in Tokyo for a while this year and she managed to put together an awesome show featuring musicians she used to play with 40 years ago! The show also featured young keyboardist Inoue Kaoru (Blue Peppers) and on chorus Natsu Summer (Mimi appeared on her latest album "Hayama Nights"). The show was excellent, and although I had already become a fan while translating her interview, I was amazed of her sound and great presence on stage.

- Like the way online shows make it possible for people worldwide to see shows from Japan (as I've been trying to promote with my live information section at Tokyo's Coolest Sound), the inverse works great too! I was able to see a show in real-time by Kissed By An Animal, a band in which my friend Tsugumi plays bass. It was my first time seeing them live and it was a lot of fun! Hopefully someday they'll make their way to play in Japan.

- Takanaka Masayoshi (ex-Sadistic Mika Band) live at Nakano Sunplaza. When translating Mimi's interview, I learned that she used to play in fusion guitarist Takanaka's band in the late-70's and early-80's. That made me re-dig my Takanaka vinyl collection (over a dozen of albums), on many of which Mimi played, including the first one I had bought and my favorite: "Rainbow Goblins"! I had also been watching the 1982 Budokan show which was amazing. Then, I heard that Takanaka would be playing nearby and that Mimi would even be a guest in the show, and I thought this was finally the time for me to see him live. It was a great show way above my expectations, a kind of retrospective of his best songs, and because it was a bit before Christmas he would sometimes wittily add some Christmas riffs. One thing I like of Takanaka is that there's no rhythm guitar in his band, he plays all guitars throughout the entire show, and his skills are amazing. He's a great entertainer and performer who I'll be looking forward to seeing again someday. His tour band also featured Inoue Kaoru (Blue Peppers). Mimi joined on stage for the song "Palm Street", and to talk a little about what she had been up to for all those years.

- dip in the pool presents "Departures Gate01" w/ Color Filter, Barbican Estate, Miyako Kōda, DJ Tatsuji Kimura, live at MoonRomantic. Color Filter is a unit I had just heard rumours of because of a friend who used to play in it in the late 90's, but this year the project restarted and this was their first show! Excellent! There was also a solo set by dip in the pool's Miyako Kōda, who sang some mantra and also a cover of Ōnuki Taeko's "Carnival". The band Barbican Estate, which uses sitar for some songs, was also a nice surprise and reminded me of Eric's Trip.

- On December 28 were my official last shows of the year, and two of them! Again, thanks to this online streaming age I was able to watch two shows held at the exact same time (because they were also archived for a few days, ha!). The first of the two was The Scooters! They're one of the last bands I had seen live for real, in late February. This show's ticket came by buying goods online, either a hoodie, a T-shirt or a postcard. I got a T-shirt which I wore for the show. :)

This time The Scooters were joined by new guitarist Manji-kun (of High-Style), and also support saxophonist Natsuki Nanae (in place of Lucy who was absent). The show was excellent, with even a few new songs, and closing with "Auld Lang Syne". Also the whole was filmed in black & white, with leader Shindō Mitsuo in charge of camera switching. I wish I could see it once more someday!

- The other show on the same day was of Kaji Hideki, with for support band the two of Neil & Iraiza (Horie Hirohisa and Matsuda "Chabe" Gakuji) and flutist Nari (of Scafull King), plus the show was to have for special guest Nomiya Maki! Kaji Hideki wore his blue suit as seen on the jacket of latest album "Goth Romance". With that backband, the show had a special feel of old friends hanging out together, and all those Pizzicato Five covers with Maki (three of them!) sounded awesome when played by those Shibuya-kei mates. Neil & Iraiza also played one of their songs for encore.

Welcome back Emiri! Emiri performed with a full band (with drummer Manaka!) and she sang all songs from album "GREENPOP" plus latest release "Asaninare", and a song she wrote for Niiyama Hina (Usagi No Mimic). She also announced that "Asaninare" will be released on 7" on November 25. The show is viewable until October 13 (JST) for ¥2000 (details).

sugar me "Flower in Anger"

I was saddened when Kai announced stopping her activity as an idol, after becoming a fan last year with her great EPs "Moonlight Tokyo" and "Paper Diamond" which had songs produced by Yoshida Tetsuto and Suzuki Keiichi (among others), and even a cover of Nomiya Maki's debut single "onna tomodachi". In this last show she played all of her songs, including the B-side of her last 7". That was a very good show and I was glad to see her singing one last time!
(By the way, I played Kai's songs twice on my radio show: vol.2 and vol.9.)

- The Pen Friend Club (via Twitcasting)

Radio: The 9th episode of my radio show was aired on September 23 on La Face B (Montréal-based Internet radio)! This time my selection went towards new wave-y sounds. Lots of fun and surprising songs! Enjoy!